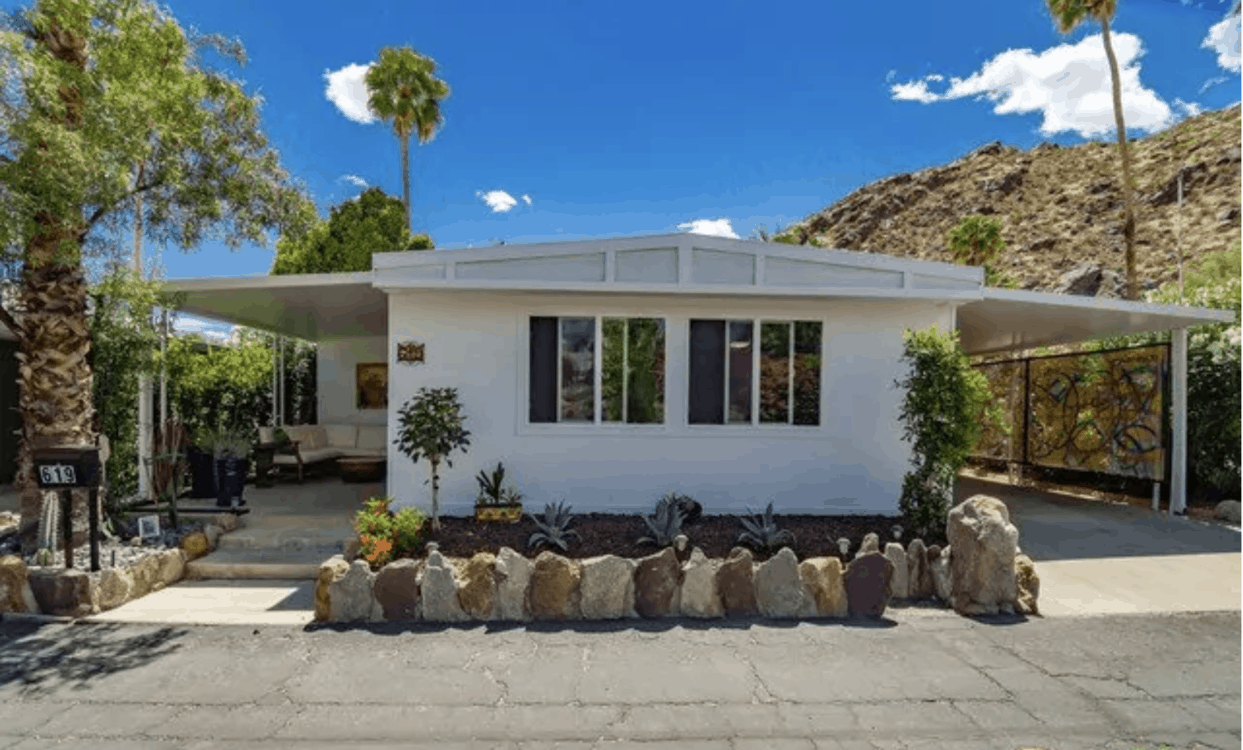 Mid-century modern is probably the most aptly named style because it became popular in the exact middle of the 20th century. Another reason mid-century modern has had such an iconic following has to do with oil. Mid-century modern furnishings were the first great home decor style to be made with petrochemicals. New materials meant fresh new designs, always a collectible.

Author Cara Greenberg coined the phrase “midcentury modern” as the title for her 1984 book, Midcentury Modern: Furniture of the 1950s…”Midcentury modern” itself is a difficult term to define. It broadly describes architecture, furniture, and graphic design from the middle of the 20th century (roughly 1933 to 1965, though some would argue the period is specifically limited to 1947 to 1957). The timeframe is a modifier for the larger modernist movement, which has roots in the Industrial Revolution at the end of the 19th century and also in the post-World War I period.

If clean lines, bright whites, and bold accent colors make you feel at home these 3 mid-century modern mobile homes will be right up your alley.

The cyclical nature of home decor and fashion paired with the minimalist lifestyle movements have given us some beautiful homes these last few years.

The rule of thirds is much easier to obtain in mobile homes with mid-century modern decor. As you look through the photos keep an eye on the heights of the furniture and the swift curves of the wood.

I think you’ll enjoy these 3 mid-century mobile homes as much as I do!

The easiest way to achieve a mid-century decor style is to focus on furniture with clean lines that don’t overwhelm the space. That’s exactly what the homeowner has done in this home.

The listing describes the home:

Thoroughly upgraded home in wonderful 55+ community. Floor plan includes 2 master bedrooms each with en suite bathrooms. Almost every window in the home has up-close mountain views. The kitchen has been re-imagined as a Chef’s Kitchen complete with a stainless steel island to handle any prep work. The home also has an exterior laundry area close to all service hookups. Plenty of storage space too! Upgrades include new flooring, paint, roof, evaporative cooling system, entire master bathroom, backyard fencing, lighting and wiring to name a few. Community features include year-round heated pool & spa, clubhouse, and exercise facility. Park has a short lease period to 2027.

This 1966 model mobile home sold for $99,000 in June. It has 2 beds and 2 baths with 1,000 square feet of living space. If the interior of the home doesn’t appeal to you the exterior certainly will.

This double wide has one of the most unique ceiling treatments I’ve ever seen and the simplicity of it is mind-blowing. The ceiling panels were removed, along with the insulation and the vapor barrier, just leaving the roof trusses.

These images are exactly what the majority of mobile home ceilings look like behind the ceiling panels.

Those walls look like they were done by an expert (darker colors tend to show off bad mudding jobs and they look great).

The kitchen is gorgeous!

While the sky appears to be a real estate camera trick the landscaping is probably legit and it is great!

They call it Palm Springs’ latest urban renewal project and it looks great on paper. The idea was to replace older mobile homes with new manufactured homes while leaving a few older mobile homes to lend character to the landscape.

One could argue that 254 Lei Drive in Palm Springs is on the corner of mid-century and uber-modern.

Regardless of the sluggish sales, the following homes are stylish factory-built homes with a super modern mid-century style that works well with the smaller footprint.

A couple of the new single-section manufactured homes that sold quickly in the park have been placed back on the market in just a few months time. That’s the case with 254 Lei Drive.

Older mobile homes have an aura about them, the walls ooze with stories of humanity at its best and its worst. These walls are clean and ready for their own histories to be written.

This is a resale in the very popular Palm Canyon Mobile Club in south Palm Springs. Approximately $14,000 in owner upgrades make this home a great value! This is the Bradford model which the county assessor measured at 912 sq. ft. This home has a large, covered front porch. The open floor plan of the great room features kitchen, living room and dining area, perfect for entertaining. High ceilings make it feel even bigger with lots of south facing windows providing natural light. The owners have added additional stairs to the side yard, landscaping, cement patios, a storage/garden shed, tinted windows and extended carport cover for two cars. They have also added custom blinds. The community area in the development has been extensively remodeled with a beautiful clubhouse, pool and spa, dog parks, and gym.

This manufactured home has 912 square foot of indoor living space and is priced at $229,500. That comes out at around $252 per square foot, far above the national average.

It has 2 beds and 2 baths along with a living room and kitchen coupled in an open-space floor plan. Each room is has a canvas of bright white, allowing light to bounce from the floor up to the 9 foot high ceilings.

The agent (or owner) has taken great care to give the home just enough character, careful to not go overboard.

Bold art pieces in a similar theme are scattered on and around the walls. An accent wall was created using just 4 things: 3 large canvases and a single sculpture. The designer proves that wall art doesn’t need matching to work. Design and scale pair together just as well.

You don’t see sculptures on pedestals much anymore but it’s a great way to add depth and color to an odd space.

Caution needs to be exercised when a home has only 900 square feet of interior. Storage is important but it needs to be the right kind of storage. The long sideboard stretches from wall to wall in the dining room creating a built-in look.

Transom windows are making a huge come back in new manufactured home design. It’s a perfect way to let light in without losing privacy or safety.

The second bedroom has a sliding glass door that leads out to a deck.

You can see the new mid-century modern mobile homes in the Palm Canyon Mobile Club. Just a couple doors down there’s a similar home for sale.

There is another home for sale in the same park obviously designed by the same person.

Ready to downsize but not give up the comforts of a modern home? Welcome to the Parkview at Palm Canyon Mobile Club, our most popular model. Enter the home from a spacious private deck, into a great room, with kitchen opening up to the living area. Flooded with light from numerous windows throughout, plus 9′ ceilings. The open floor plan features sliding doors out to your outdoor deck. Enjoy the added bonus of a separate laundry room too. Spacious outdoor area, will include deck, perimeter fencing, and carport. The Palm Canyon Mobile Club is Palm Springs’ latest urban renewal project. The new owners will enjoy the remodeled club house, pool, gym, hot tub, bbq areas, dance hall, plus two dog parks, one of the most unique communities in Palm Springs. Space rent: $682.50/month A Pictures of model home for this floorplan, not the actual home.

The developer saved money by using the exact same kitchen design in all the mid-century modern mobile homes in the installed in the park.

Love, love, love these bedrooms! The minimalist furnishings are perfect for a small bedroom and I absolutely love those beautiful colors!

The vintage shaving 3 ad feels appropriate for the home.

Do you love mid-century decor? Have you created a mid-century modern mobile home? We would love to see it!

Thanks for reading Mobile Home Living! 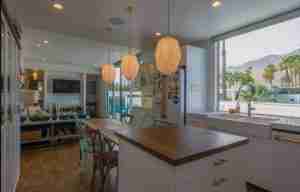 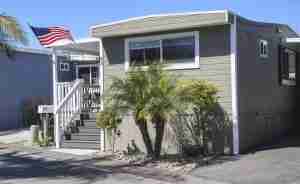 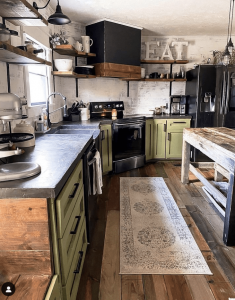 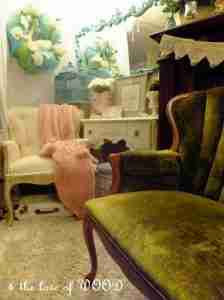 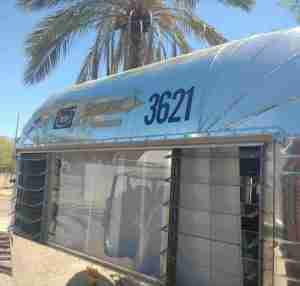 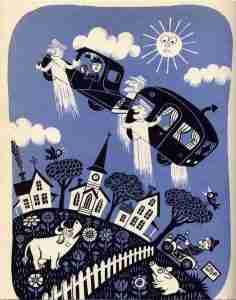