Our new contributor, Pam Willis, writes how her family weathered the economic collapse. Choosing to buy a manufactured home on several beautiful acres has allowed them a second chance at home ownership.

The housing crash affected millions of families in the US. By the end of 2010, almost a quarter of all homeowners with a mortgage (23.1%) owed more than their homes were worth.

Those lucky enough to own their homes outright were still affected. To weather the storm of the economic collapse and massive residential investment loss, employers began cutting costs and reducing their workforce (The U.S. Housing Bubble and Bust: Impacts on Employment).

Karen and Jim now live in Central, WI. Karen is my sister and Jim is her husband. Like millions of other Americans, they took a hard hit during the recession and housing market crash in 2008. Jim was a carpenter and like so many others in the building trades, he lost his job early in that cycle.

Karen was still working, but with only one income, they eventually lost their home.

Out Of The Darkness

After losing their home, Karen and Jim rented a one bedroom apartment in southeast Wisconsin for 5 years, all the while saving as much money as possible. In 2014, they began looking for an affordable property in central Wisconsin (near me).

They longed for some acreage out in the country.

A Second Chance at Home Ownership

In November 2014, with a Wisconsin winter on its way, they found their dream property; 20 acres of mixed woodland and prairie, complete with a late-19th Century stone foundation, post and beam barn. 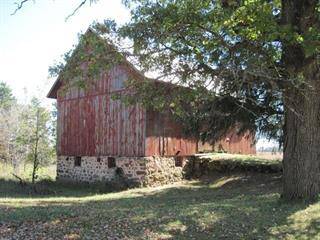 The 1989 single wide (14’ X 70’) manufactured home, however, was in rough shape. Like so many ‘seasonal’ mobile homes in the area, this one had been used as a deer hunter’s base camp.  The home was filthy.

The property was in foreclosure but the price was right and Jim, the carpenter, saw potential in the neglected home. 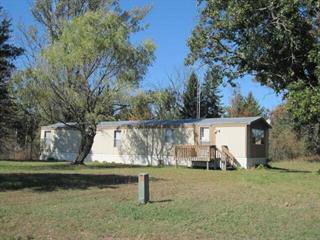 The manufactured home had vinyl skirting but no insulation behind that skirting. With Wisconsin’s sub-zero winter temperatures looming, insulating that skirting was first on the list. Using 1 1/2 inch Owens Corning Closed Cell Insulation Board, Jim and I insulated under the house.

There’d been an obvious water leak somewhere in the bathroom. Water had migrated along the south wall of the house and the floors were sagging. There was also some sagging under a couple of leaking windows.

Learn how to replace flooring in a mobile home here.

The riser from the shower valve to the shower head had come loose (it had never been glued properly), and water had been spraying behind the wall when anyone showered. Fortunately, the house was vacant and the water to the house had been turned off and there was no evidence of any significant mold damage.

Learn about plumbing in a manufactured home here.

The house was absolutely stuffed with old furniture that had taken on a very unpleasant odor, as had the wall to wall carpeting. Once we got all of the furniture and the carpeting out and into the dumpster, the smell improved significantly.

And Now, A Nice Solid Floor to Walk On

As sections of wet and damaged subfloor were removed and replaced, damaged sections of fiberglass insulation were taken away as well.

Karen and I used a fair amount of bleach to clean those areas before they were closed up again with the new subfloor. There was also a big hole right in the middle of the living room (as depicted by the taped square in the photo). 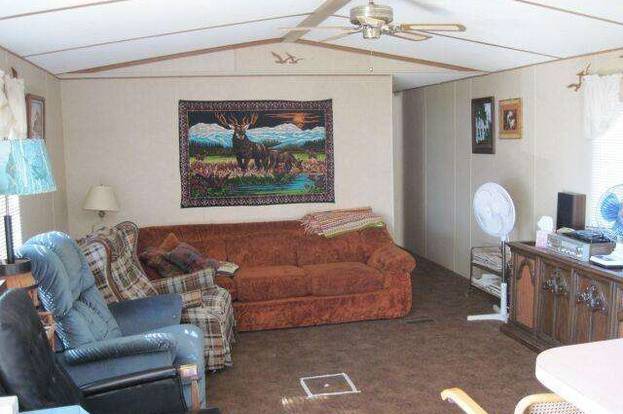 I have visions of rowdy deer hunters, rough-housing after a day out in the woods and someone getting body slammed into the floor!

Karen and Jim were looking for a rustic North Woods type vibe for the home and chose a laminate hickory plank floor with nail holes.

The floor was from Lowe’s Allen Roth collection of laminate flooring.

My husband and I had used this same flooring (in a different pattern/color) in our own single wide the year before and had recommended it. The product is reasonably priced, easy to work with, and looks great. Additionally, it comes with the foam already attached to the back of each plank. Most floating floor systems require placement of foam underlayment between the subfloor and the laminate floor. If you have to purchase rolls of this foam separately it will add significantly to the cost of the project.

Having the foam already attached saves time and money. The Allen Roth flooring also does NOT have the excessive formaldehyde in the product, which as recently seen in the news, was making people sick when they used certain laminate and vinyl flooring products.

Leave the unopened boxes of planks in the area where they are to be installed for about 48 hours before beginning your installation.  This gives the planks time to adjust to temperatures and humidity in your home.

1976 Single Wide Has A Remarkable Transformation

Professional mobile home kitchen remodeling is an expensive proposition and just wasn’t within the budget. After a good cleaning, it was perfectly serviceable. Jim did, however, solve some storage issues by making this great pantry cabinet.

You can see their flooring choice in this photo 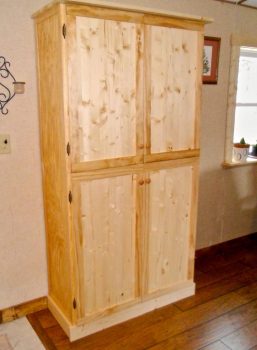 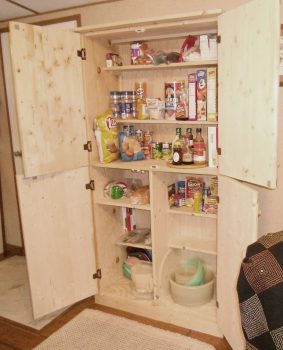 Due to the leaking problem in the shower plumbing wall; the wall had to be opened and the pipes replaced. My husband, a retired plumber, put in new pex pipe and replaced the shower valve. 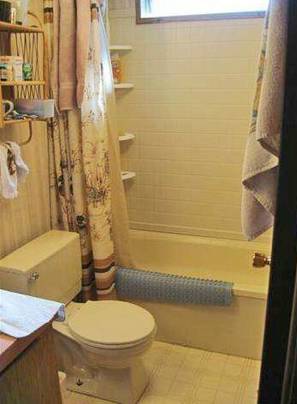 Because Karen’s elderly mother would be living with them, they chose a Sterling low threshold shower and added grab bars. 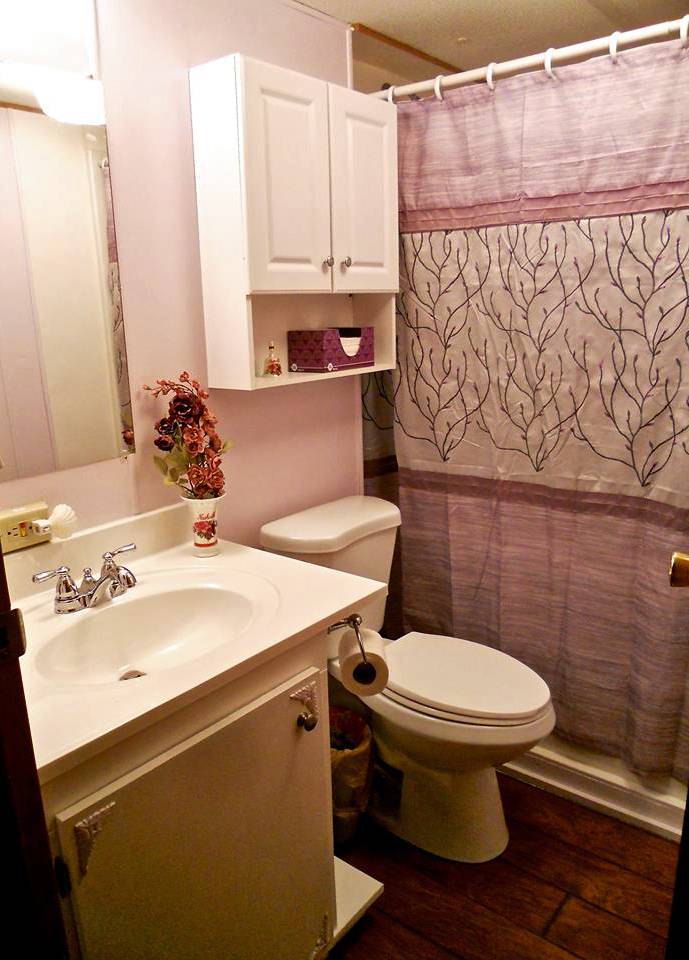 They also replaced the toilet with a taller “Comfort Height” toilet.  Jim made the vanity cabinet to fit the new sink. He made the cabinet so that the toilet paper holder would fit into the corner of the unit, saving some space in the cramped quarters.

Karen likes the color violet.  She had some odds and ends of leftover latex paint and mixed this lovely color herself. Turned out great, and she didn’t have to buy that extra gallon.

Other smaller improvements have been made as the budget allows.  The windows though had to go.  The original single pane, aluminum clad windows were replaced with double glazed, lo E, argon filled replacement windows before winter sent temperatures plummeting.

A Second Chance at Home Ownership

With the smelly old furniture and carpet removed, the skirting insulated, floors and bathroom replaced, and a lot of cleaning and scrubbing, Karen and Jim were ready to move in.

They got a second chance at homeownership by putting a bit of TLC into a neglected but affordable mobile home.

They also got their dream ‘place in the country’ to boot!

Do you have a story about surviving and thriving after the housing collapse? We’d love to hear it in the comments below!