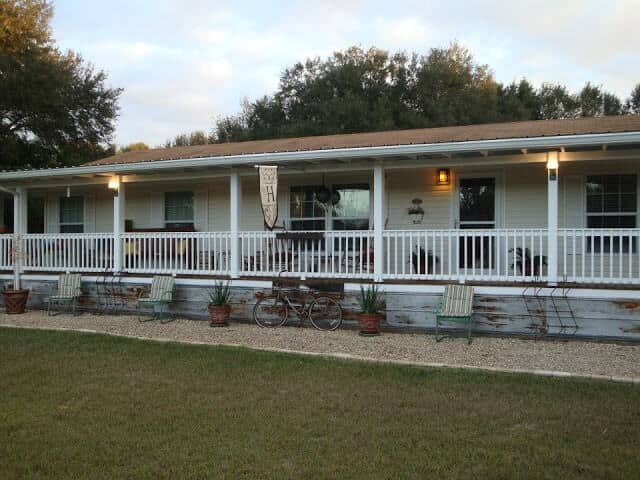 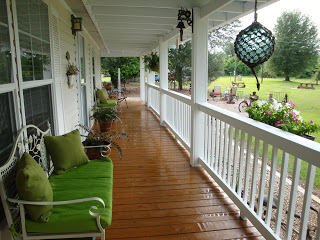 Mobile Home Living’s newest featured home is a newer double wide with beautiful and creative handiwork inside and out . It is owned by Molly and her late husband Christen (Chris) Howell.

Molly Howell is a 24 year veteran of the Air Force originally from Iowa and she loves architecture and design. Her home is a mix of eclectic decor with many historical touches all around. She is highly educated and her life has been filled with great adventure; living in other countries and even surviving a hijacking attempt! Her and Chris moved to his hometown in Florida and set up a beautiful homestead on the land he was raised on, complete with a gorgeous double wide. She lost her husband to cancer less than a year ago but her home is a beautiful reminder of him with all the ingenious uses of recycled materials and beautifully designed objects he created out of basic materials.
Chris Howell was an adventurer and a man of many talents. A world traveler as well and a follower of dreams, he had an endless yearning for knowledge. He loved working with his hands, creating beauty through art and photography, restoring classic cars and refurbishing anything he could get his hands on. He traveled extensively and knew how to make a house a home with dramatic touches of handiwork.

Looking for Their Forever Home

When they first got to Florida they were living under a barn, which Chris built, in a teeny-tiny 1978 Winnebago motor home. They were pretty desperate to have a house, especially since it was costing almost $200 a month just to store household goods. They wanted a house that wouldn’t cost a fortune and one that wouldn’t force then to jump through ridiculous hoops to obtain.

Initially wanting to build a home out of salvaged materials, Chris had dismantled a house in a nearby community which had been built in 1907. In 2005 once the had completed the move and were ready to build they hoped to be able to use most of the salvaged materials. However, the state of Florida has laws that hinder the reduce, reuse and recycle movement. Ironically, in 2005 Florida changed their building code as a result of the devastating hurricanes that hit that year. They were told they could only use salvaged materials if every piece of lumber was certified and stamped by a structural engineer, which would have been cost prohibitive to say the least!  So much for reuse, recycle, re-purpose huh?!

Around the same time some friends of theirs purchased a Homes of Merit manufactured home. They really liked what they saw. Their friends had done a lot of research and discovered how well-constructed the Homes of Merit were, and how they were able to upgrade many of the features to make it exactly what they wanted.
After much discussion, around January or February of 2006 Chris and Molly went to look at some models, and felt that the Forest Manor best met their needs. They placed an order but made several changes; upgrading the kitchen, adding a GE Profile package of a stainless fridge, cook top, wall oven, microwave, dishwasher, as well as a Broan stainless range hood, all for an extra $2500.

They also upgraded the insulation and the windows. Changed the layout of the master bath, eliminating the garden tub and adding a large shower enclosure in its place. Where the standard shower would have been, they had them put in a large linen closet. They also changed the location of some of the windows to better accommodate furniture placement and changed the window in the dining room to a sliding glass door. Which is exactly why mobile homes are so great, you can easily change the things that you want when you order new!

Chris made several very creative things in and around their home. The use of the antique tin from the old barns as skirting, the wrap around porch that lends a farmhouse look to the home and even a pot rack and a towel holder made out of copper piping! He also built a gorgeous guest house from reclaimed and salvaged materials.

The driveway of this homestead is a county road that was originally the old road that went to Chris’ father’s and grandfather’s tobacco barns. When they had the opportunity to name it, they chose ‘Tobacco Barn Road.’ During a bad storm a few years ago, the old barns fell down and Chris salvaged all of the tin from them, eventually deciding that it would be great as skirting around the house. They also used it as siding on their pump house so it looks as if it’s always been there.

In 2011 Chris lost his battle to cancer. During his final years, he developed a wonderful sense of peace from the land that held so many fond memories for him. A wonderfully talented man was lost but he certainly left Molly with a gorgeous home to live in and great memories.
Thank you, Molly, for sharing your home and your story with us!

Molly has a blog that she will be sharing her creativity and wonderful writing talents on called Down On Tobacco Road. With only a couple posts up her writing style is perfectly entertaining and is a joy to read.

The wrap around porch and the guest house is dreamy and the salvaged tin makes the home seem as if it’s been sitting in that spot for decades. You are a very lucky woman and although I know you miss your husband immensely, I assure you he is looking down on you and smiling every minute.

Thanks for reading Mobile Home Living.Tomorrow we will post Molly’s interview and a few more photos. She shares her advice freely so be sure to come back and read it. As always, please like us on Facebook, follow us on Twitter and tell your friends and family about us.

Paradise Cove is the number one spot to find double wide remodels that sell for over a million dollars. Known as…

Betsey Johnson’s One of a Kind Mobile Home

Making the Most of Your Single Wide Living Room

Diagnose and Repair Common Vent Issues in Your Plumbing System

How to Paint Vinyl Walls and Remove Battens in Mobile Homes

Can You Remove Walls in a Mobile Home?

How to Replace Subflooring in a Mobile Home