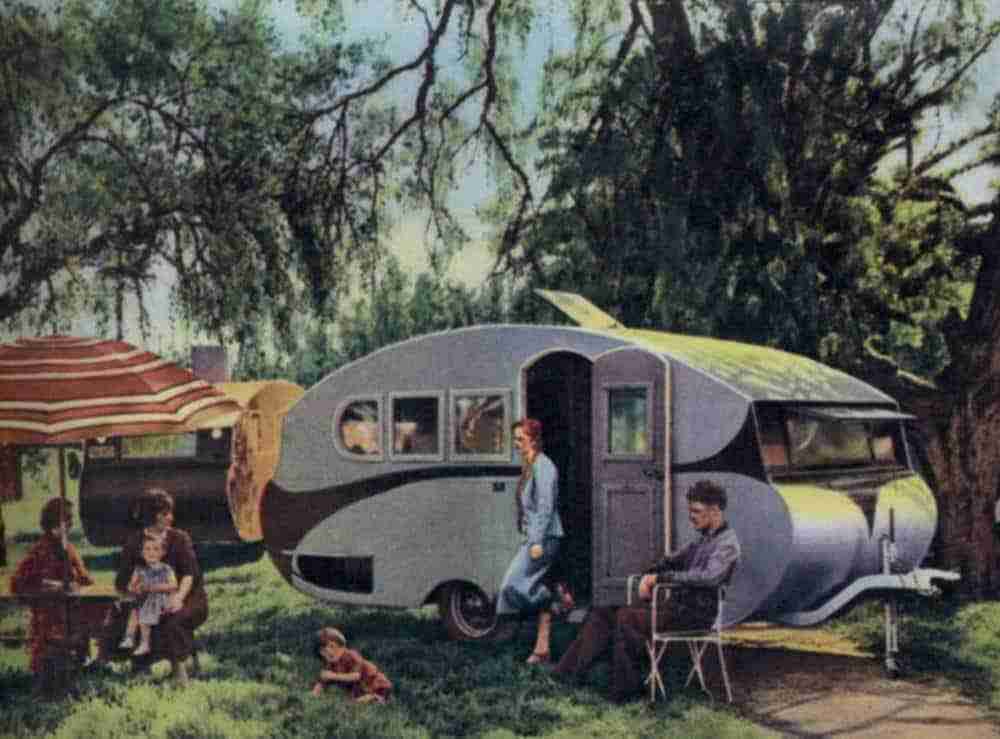 A travel trailer was the ultimate accessory for the automobile owner in the early 1930s. Unfortunately, it wasn’t so easy to buy a one. You could build your own trailer or you could pay someone to build one for you but both options were expensive. Thankfully, The Covered Wagon Company changed that when they began mass-producing their trailers in 1931.

Like Ford’s assembly line had made it possible for the average middle-class family to buy their own car, mass production and in-line assembly did the same for travel trailers.

By 1936, The Covered Wagon Trailer Coaches were building 35 trailers a day on an assembly line.

1936 travel trailers became a success for a couple of reasons. First, was the national highway system that began in 1926 when there were over 23 million cars and 3.5 million trucks on the roads. The road system wasn’t so great though. By the end of the 1930s, there was a complete interstate network that allowed for smooth travel across the nation. Second, was a better economy.

Journalists seemed to almost ignore or suspect trailers of being a passing fad. For every positive mention of travel trailers there seemed to be two that were negative. Hobo tourists had already started giving the travelers a bad reputation. It was a rough go for the industry from the beginning. Were the trailers going to be a camping accessory or could it become more?

1936 seemed to be the year that travel trailers and mobile homes finally got its footing. Life magazine featured a luxury trailer on its cover, Trailer Ahoy! had been published, and the Woodall’s Park Directory was beginning.

That’s why I think 1936 deserve an extra special place in the history of mobile homes.

Ford’s birthplace was a perfect location for the mass-production of trailers. It just made sense.

More than 2.5 million automobiles were coming out of Detroit, MI in 1936. Hundreds of small companies were keeping the assembly lines moving by supplying the large auto manufacturers. Those same companies could supply travel trailer builders, too.

The Covered Wagon Company opened in 1931 in Detroit, MI. It is recognized as the first company to mass-produce travel trailers in the US but it certainly wasn’t the only.

By 1936, over 400 companies were building travel trailers and mobile homes in the US.

The Two Types of 1936 Trailer Owners

Before WWII, there were two camps, so to speak of travel trailer owners. The first was the family that would leisurely travel the country for a few days or weeks and then goes back home. The second was living in their mobile homes full-time and traveling wherever the wanted, though that usually meant they were following seasonal work.

H.W. Magee wrote an article for the Modern Mechanix magazine called Hitch Your Wagon To A Car detailing everything about the new 1936 mobile homes.

He interviewed several owners of 1936 travel trailers and seemed a bit suspicious of the nomadic lifestyle these people had adopted so quickly.

You could buy a standard 1937 mobile home for $300 but there were some models that cost thousands. There was a model for every budget and the ability to finance the trailers allowed many families the chance of owning one. As long as you had the engine to tow between 1,000 and 4,000 pounds your options were wide open.

The lengths of the 1936 travel trailers usually increased with budget, starting at just 12 feet long. Expensive models could reach 30 feet but the average was around 18-20.

1936 Travel Trailers Had All the Luxuries of Home

The Covered Wagon used a bread loaf shape as it minimizes material waste in the factory and still allowed for easy towing.

Most factory-made trailers have a foundation frame of tubular steel and angle iron, or a combination of steel and spruce, to which the springs are attached. Spruce may be employed for the skeletal structure while plywood, tempered Masonite or some similar substance form the walls, roof, and interior. An outer covering of waterproof leatherette improves the appearance and protects the wood from the weather.

Many factory-made trailers had Spruce structures with a tubular steel and angled iron frame.

The elementary bread loaf look wasn’t the only design in 1936 but it is the design most associated with the era.

The interior of the more simplified Covered Wagon trailers usually consisted of thin plywood walls and Linoleum covered floors. A car battery could power fans, lights, and radio just like any home had in 1936. The more expensive models would have gas-generators and far more elaborate and aerodynamic designs.

The more sophisticated 1936 travel trailers had interiors modeled after million dollar yachts and an air conditioner was available in many models. Some models had lower floors for added headroom and bathtubs. Others had telescopic drawers, disappearing tables, and fold-out beds.

Today’s prairie schooner is a streamlined, luxury-crammed “cottage” on rubber-tired wheels. It is hitched to a 100-horsepower car instead of to a team of oxen. Thousands of families are towing these rolling homes behind their cars today, living in them as they travel. They stop where fancy dictates, and wherever they stop, home is waiting just behind the rear bumper. When they tire of sitting still, they move and take their home along.

When one thinks of the first travel trailers, the Pullman or Airstream isn’t the first thought as they seem to be ahead of their time.

The Trailer Industry was BOOMING in 1936

Sherman’s Covered Wagon may have been the first to mass-produce travel trailers but he had competition with weeks.

The trailer dealership network mimicked car dealerships. Independent dealers would sell several different brands of trailers but builders that offered better deals and incentives to the dealers were pushed more.

In fact, it was a Covered Wagon dealer that became the company’s biggest competitor.

Some of them are making only a few units per month, others are turning out several thousand a year, and nearly all are literally swamped with orders. Some boast five times as many orders as can be filled and are doubling and tripling their factory space in an attempt to catch up with the demand.

The travel trailer industry is still on the books for having one of the fastest industry growths in history. People were buying anything that had wheels and a hitch. It was a complete buying frenzy and families were waiting months for their 1936 mobile homes.

Related: Unique Mobile Homes – Highrises of the Past, Present, and Future

1936 was a great year for the travel trailer industry. The industry was in its infancy and though so many things were going against them, the industry found its footing. From there it was onward and upward to become one of the fastest industry growths in US history.

Many of the 1936 travel trailers, like the folding trailer was ahead of its time. The designers weren’t constrained by much because they didn’t have past sales charts or show data to tell them what the public wanted to buy – they just had their imagination.

American ingenuity and quality craftsmanship wasn’t hard to find. Companies, and their employees, took pride in their work and built the trailers to high standards we would never find nowadays.

You may enjoy this article about mobile home kitchen designs in the late 1950s.

Do you have a favorite year of mobile homes? Favorite brand?

As always, thank you for reading Mobile Home Living®!