Marilyn and Alec Widdifield have a 1978 Fleetwood single wide that they remodeled recently and I’m honored to get to feature it.

Their single wide started out as a 14′ x 72′ but two additions were added. The home sits it Frontier, Sk. Canada, a small town near the Montana border and has been thoughtfully updated through the years to accommodate a growing family and withstand the coldest of winters in a stylish, yet affordable, setting. 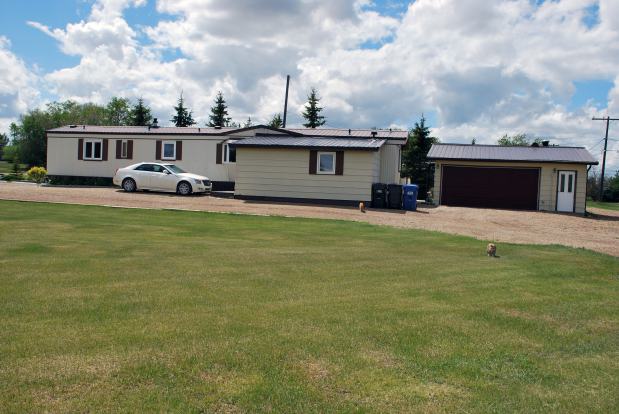 The Widdifield’s adapted and improved their home whenever they could.  Marilyn purchased the home as a single parent with two young girls in 1982.

She supported herself and her daughters as a hairdresser and used one of the bedrooms as her salon so she could work from home. 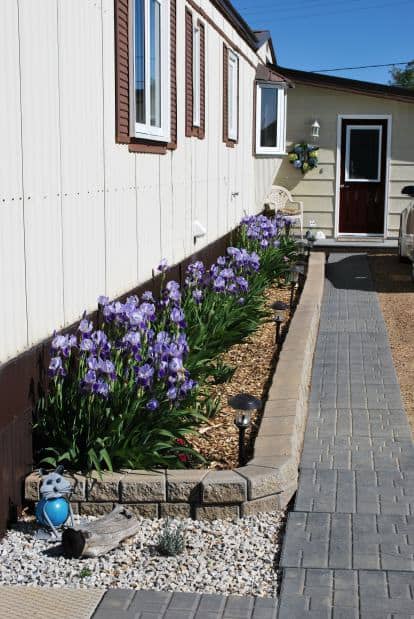 Marilyn took advantage of a loan program the Canadian government was offering and received a $10,000 home remodeling and improvement loan at 6% interest to have a 12′ by 22′  addition built onto the home. This new space serves as a porch and a new salon area. The mobile home addition gave her daughters their own bedrooms too.

Like Marilyn, many homeowners opt for mobile home additions that are set a bit lower than their mobile home. This makes it easier and more affordable to tie into the mobile home’s roof. 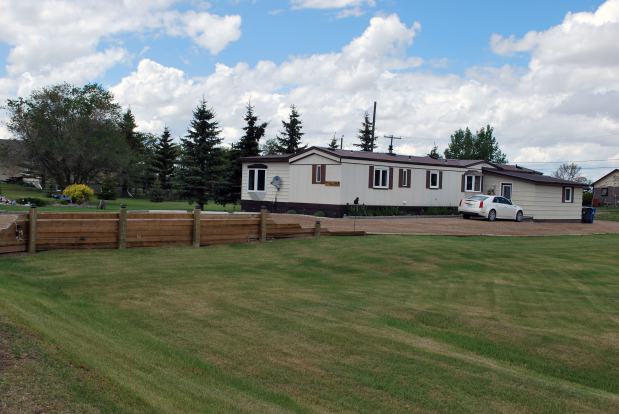 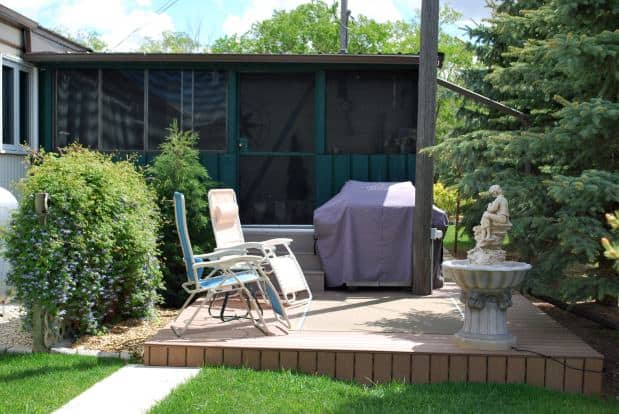 In 1992, Marilyn married Alec, a single father with 2 girls of his own. Soon after, a second addition was built on the other side of the 1978 Fleetwood single wide.

The additional space serves as a hallway, storage room, and 2 additional bedrooms. However, this addition was built level with the home as you can see in the image below. 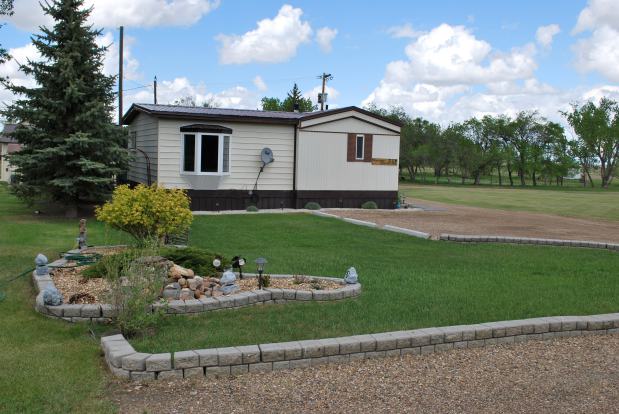 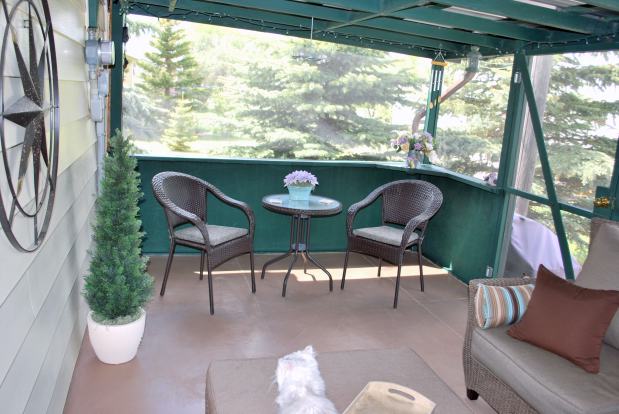 The industrious couple didn’t stop with the additions. Practically every surface in the 1978 Fleetwood single wide manufactured home has been updated.

New windows and steel roofing over the home and both additions, and new vinyl plank flooring were installed. 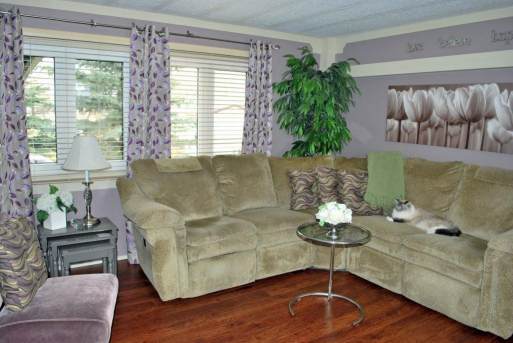 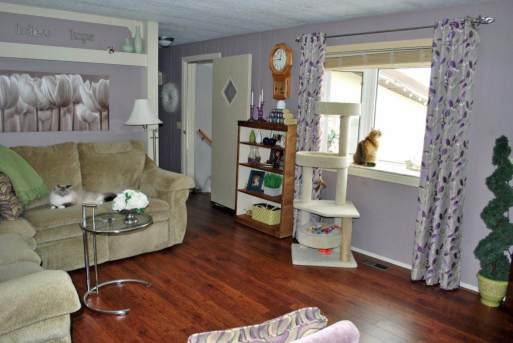 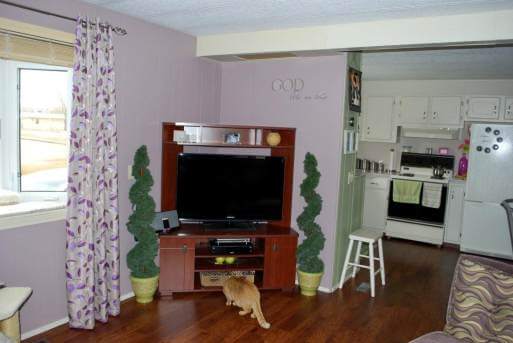 They also removed a half wall separating the kitchen and living room, giving the space a true open-floor layout. A small wall beside the refrigerator was also removed to allow a custom 9″  cabinet to be built that could house cookie sheets and pans.

Alec, an auto-body mechanic, used his experience and equipment to spray the cabinets in the kitchen, bath, and laundry room which brightened the rooms up dramatically.

Marilyn and Alec also replaced the sub-flooring that was damaged by minimal water absorption, a common enemy of the standard particle board used in manufactured homes.

Particleboard soaks up water like a sponge and will sag or bow. Replacing the particle board with plywood is a necessary upgrade in most factory-built homes.

The countertops were replaced along with faucets and sinks. Instead of the popular tiled backsplash, Marilyn used a heavy vinyl wallpaper and it has worked well so far.

Relevant: Learn how to paint a backsplash here. 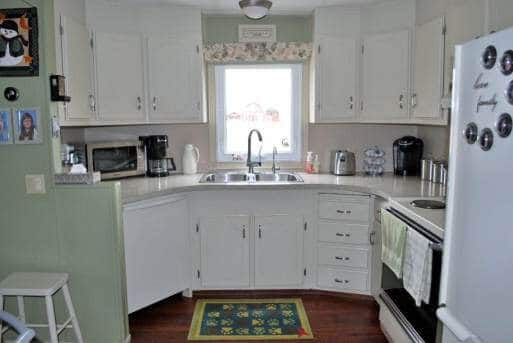 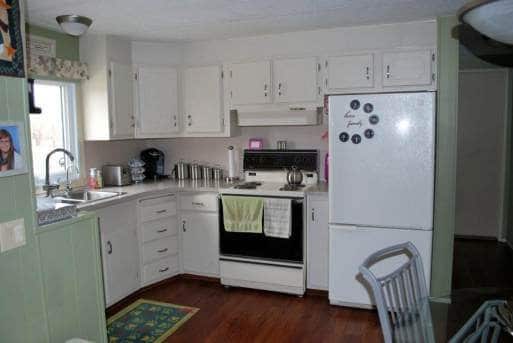 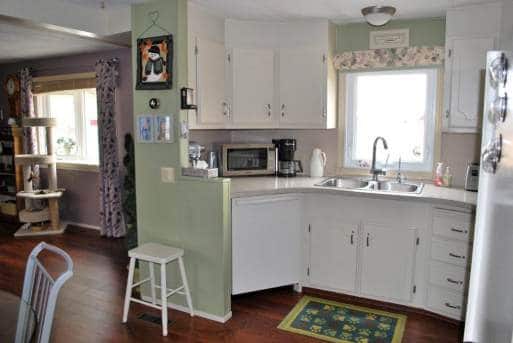 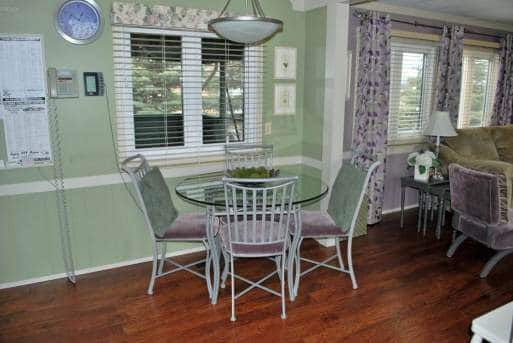 Marilyn describes a few of the updates on the 1978 Fleetwood, “I also have painted all the ceilings as they yellowed over time. My husband also built a screened in deck off the back door of the second addition and a platform deck for the BBQ. We have seven cats and they love the deck as much as we do!
“In the summer, I leave the back door open to the deck and they spend a lot of time out there bird watching. We put a bird feeder just outside the screen so there are lots of birdies to watch!
The home has the popular split floorplan with the master at one end and the other two at the other end with a bath at each end, the one bedroom is a guest room and the other tiny bedroom is my tanning salon for my customers since it is close to the entrance door.” 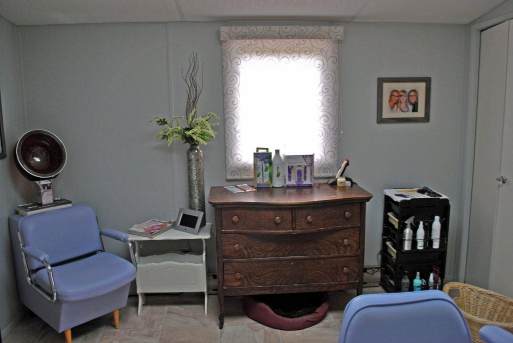 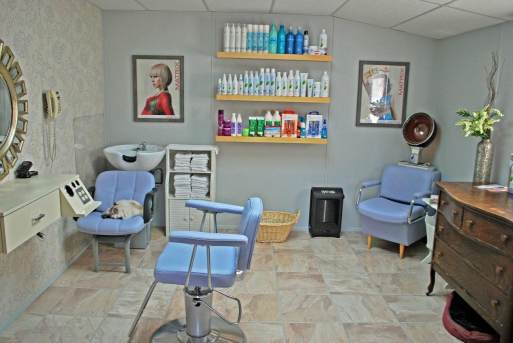 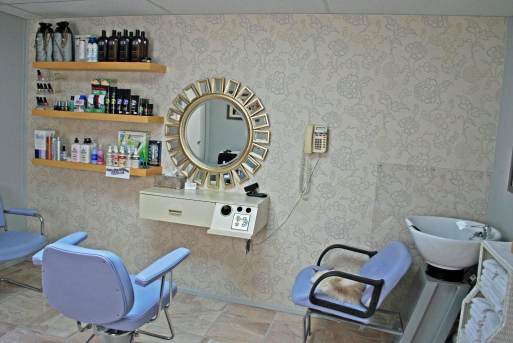 I asked Marilyn what tools and materials they used during their updates. She stated that they made it a point to purchase the highest-quality they could.

They used Benjamin Moore paints and Mannington vinyl flooring. The windows are All-weather, made in Canada. They hired contractors to build both additions. 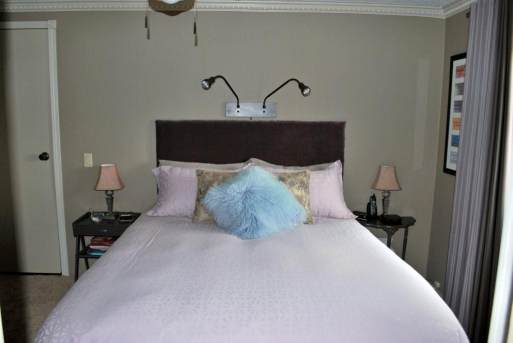 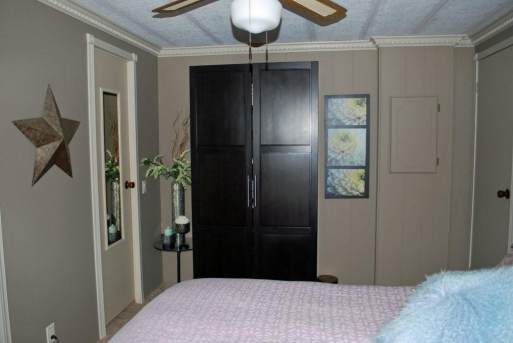 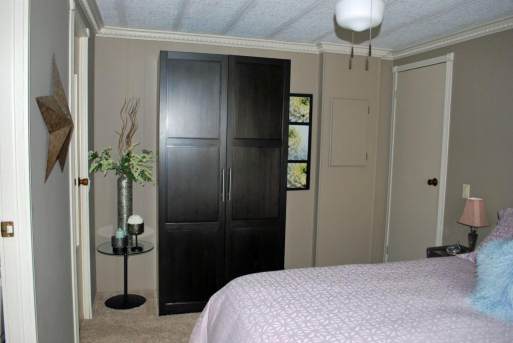 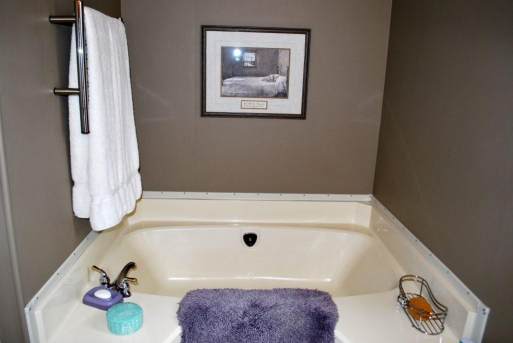 Over the last 23 years, the Widdifield’s 1978 Fleetwood single wide has seen many changes.

They saved money by doing what they could themselves and hired out the jobs they didn’t feel comfortable doing – exactly how it should be. Hiring experienced professionals is often a much better deal in the long run for large jobs or jobs that require specialized tools or knowledge.

I also asked Marilyn if she had any advice for new mobile homeowners:

I think the most important thing is to keep up with maintenance because things can snowball pretty fast and then you could end up with an big repair bill. When something needs to be repaired it has to get done or things can deteriorate pretty fast.
As far as living in a smaller space, I haven’t had a basement for the last 35 years and I find that I just don’t keep a lot of stuff because there is nowhere to store it. I think the most important thing about living in a small space is to keep clutter away! I have to really like something before I buy it and I will probably have to get rid of something to make room for it.

Marilyn said the biggest challenges during the updates were dealing with the elements. They had to replace several water lines that had frozen under the home with PEX in -30 temperatures one winter. Brr.

The Widdifield’s are proud of their home as they should be. It is a great home that was made even better over time.

It makes a lot of financial sense to build onto a home as needed instead of just buying a bigger home. The home has been paid off for several years.  By building additions and giving the home updates as needed they have a beautiful home without incurring extensive debt to get it.

This 1978 Fleetwood Single Wide Remodel is exactly what Mobile Home Living is all about.

As always, thank you so much for reading Mobile Home Living®!