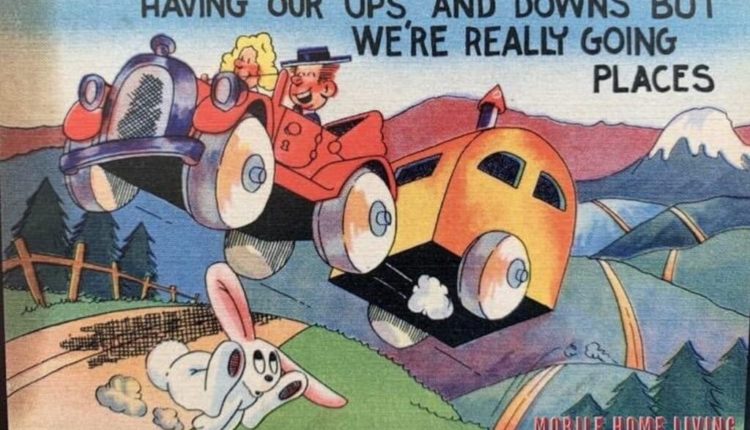 Postcards were almost as important as the trailers when travel trailer first hit the scene. They were essentially the Facebook of the time. Families and friends traveling in their campers would send postcards to everyone they knew to let them know they were safe and having a wonderful time. A little deliberate bragging was always important too. In this article, we take a look at 35 of those vintage mobile home postcards.

Almost as important as traveling the world was letting the folks back home know where you’d been and what you’d seen.

If you had the money to buy a car and a camper in the 1930s you were doing OK for yourself and your family. Having the means to travel and see the country was still a relatively new experience for most middle-class families.

You’ll find postcards depicting some hilarious situations. Outhouses, clotheslines, over-packing, and scantily dressed women seem to recurring subject matters. These postcards didn’t offend anyone, it was just a lighthearted look at the new trailer trend that was one of the fastest growing industries in the US. Trailers were the cool new toys and a whole new way of life that was catching on quickly.

This is a huge collection of funny vintage mobile home postcards, mostly from the 1930s and 1940s. There are some postcards here that are just, well, brazen. It was a different time back then for sure!

In the trailer and camper world, you couldn’t collect bulky items so postcards were perfect. Collecting postcards is still a popular hobby for many though only a few actually mail them to family and friends.

The History of Postcards

In 1861, the US government began allowing privately printed cards that weighed an ounce or less to be mailed through the US Postal System. The first postcard was copyrighted that year but you could only write the recipient’s address and your return address on the back side of the cards. However, it still cost 2 cents to mail these little cards until 1891 when it was finally reduced to 1 penny. This reduced rate and the World Columbian Exposition in Chicago in 1893 helped cement postcards as a popular collector’s item.

The US Postmaster allowed a redesign of the cards in 1907 to have an area for messages on the back left side. This change brought about the “Golden Age” of postcards between 1907 to 1915. Between 1915 and 1930 printers saved money on ink by using a white border around the edges of the postcards. This is known as the ‘white border period’ in the postcard collector’s world. You can see a few of these postcards in this article.

From 1930 to 1945, postcards were printed on paper with high rag content which gave it a linen look and feel. Curt Teich & Co. was the most popular postcard printer during this time because of their special printing process. The developed a process that allowed faster printing, drying, and brighter photos. Many of these vintage mobile home postcards you see today in this article were designed and printed by Curt Teich & Co.

Learn more about the history of postcards on the Smithsonian website here.

I found all of these vintage mobile home postcards in these 3 books:

The first book is an all-time favorite called Trailer Travel. I’ve mentioned it several times over the last few years. It has a few pages dedicated to vintage postcards. The pages with the vintage mobile home postcards are 62, 63, and 64.

Trailerama is my second favorite book. It’s gorgeous and has a ton of great information. It also has a few pages dedicated to vintage mobile home postcards and comics.

The third book is one I didn’t think I would like at all. I had seen it on Amazon for a while but never bought it because the title and the description made the book seem to be unfriendly toward mobile homes, at least it did to me. Plus, the cover of the book doesn’t even have real mobile homes on it. I can’t help but wonder why they chose the image as the cover of their book.

The front cover is a picture of a set for an outdoor play in Europe. The title Don’t Call Them Trailer Trash, The Illustrated Mobile Home Story. It’s actually a very good book with a ton of neat information and photos about the history of mobile homes. If this had a different front cover and perhaps titled ‘The Illustrated Mobile Home Story; Don’t Call Them Trailer Trash” it would work better, at least for me. I really don’t understand that front cover image at all. Still, if you love vintage mobile homes this book should be in your collection.

Do You Have Any Cool Vintage Mobile Home Postcards?

Have you found any vintage mobile home postcards? We’d love to see them! You can link to them in the comments below or visit our Mobile Home Living: Remodels and Repairs Facebook Group and post them there. There are almost 3,000 members and we all love and appreciate mobile and manufactured homes.

Please Note: These vintage mobile home postcards are not my own. They are in books that I own and I just took photos of the postcards with my fancy smartphone. I couldn’t miss the irony of taking photos with a smartphone of photos in a book of 90-year-old postcards.