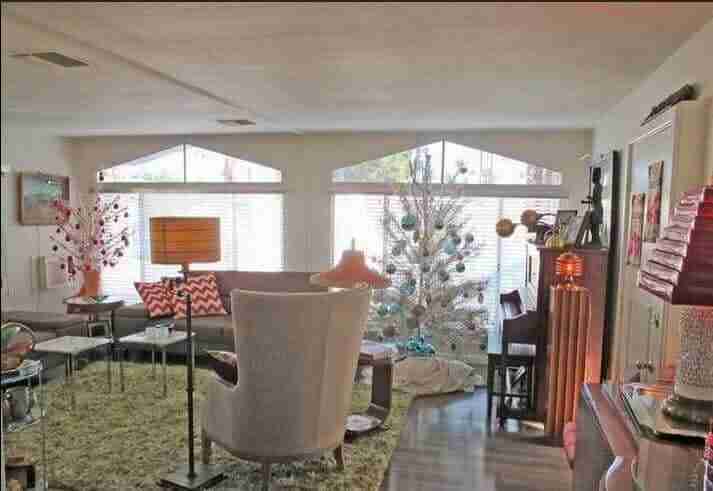 Wikipedia defines mid-century modern as an architectural movement that uses a unique style with lots of clean lines, open floor plans, and large windows that open up indoor space and allow the outdoors to play a more prominent role in the design. Mid-century modern is also used to describe furniture, decor, and even graphic designs that are focused on clean lines and bold profiles.

The mid-Century style was born between 1933-1965 but designs from the 1950s are especially significant to home decor. After the horrors of WWII, the country was ready to move forward and they did so in a magnificently stylish way. It was an era that dreamed of space travel and futuristic technology and those desires transcended onto cars, mobile homes, furniture, and clothes.

Sleek lines, retro colors, and high function are the epitome of mid-century modern which makes it perfect for mobile and manufactured homes.

A notable feature in mid-century modern home decor is a neutral color base with lots. of colorful decor and furnishings.

Light colors such as white, cream, or light grey are a perfect choice for mid-century modern mobile home decor. The lighter colors help small rooms feel more spacious because it bounces light around so well.

Below is a mid-century modern paint palette featured on the blog M is for Make:

Another important design aspect for mid-century modern decor is bold geometric patterns. You can create an accent wall with wallpaper or frame some great retro prints.

You can also use paint to create your own mid-century style walls. RetroRenovation.com shares a tutorial on creating this Fransician Starburst pattern using sponges and cardstock:

Framing affordable print reproductions is a great way to introduce mid-century style into your home. You can find the print below on Tumblr.

The image below from Remodelaholic provides several great examples of the style:

You don’t need to buy an entire room of furniture to get the mid-century modern look. One or two focal points can completely change the look of your room.

Thrift stores and garage sales are the best sources for affordable mid-century modern furniture and decor. Craigslist and eBay are other great sources. You don’t have to buy secondhand to get the look though, you can find affordable furniture in lots of places online such as Ikea, Wayfair, and Dot and Bo.

Simplicity is a big factor in the mid-century modern style. Choosing a few select pieces of decor can help you completely change the look of your room.

Of course, you can always make your own mid-century modern decor. Apartment Therapy shares step-by-step instructions so you can make your own burst clock for less than $30 here.

A Beautiful Mess shares how to DIY a burst mirror on the cheap here.

This 1965 mobile home has a great mid-century modern appeal. The large windows bring in lots of light that bounce around the white walls. It has neutral wall and ceiling colors and has mid-century furniture and decor.

The exterior of this mobile home resembles the post and beam construction so relevant to the mid-century style.

This home is for sale and you can read more about it on Trulia.com (thanks to Steven S. for finding and sharing it with us).